What a Creep: The Murder of Stanford White 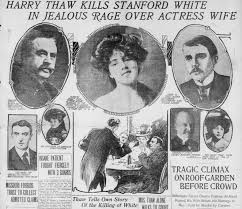 The Murder of Stanford White

Architect Stanford White was one of New York’s most revered architects who built the second Madison Square Garden & the Washington Square Arch, which stand today. In public, he was a bon vivant who moved with old school wealthy and the nouveau riche. He was also a creep who participated in the sexual assault of several young women as part of a group of entitled men in New York’s high society. A Creep, Harry Thaw, killed him on June 25, 1906, because of one such assault on actress Evelyn Nesbit who was 16.

The trials of Harry Thaw caught the nation’s interest and are a part of NYC lore. In this episode, we will discuss the major players and what happened to Evelyn after she outlived the Creeps.

And for our non-creep: One of the strongest hurricanes to ever hit the United States and Cuba this week. And last week, Puerto Rico was hit by Hurricane Fionia. Here’s a list of organizations accepting donations for those impacted by hurricanes, Ian and Fiona.