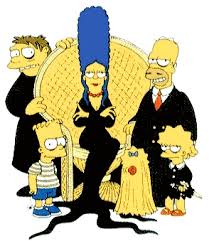 Boo! Alright you ghosts and goblins—here is my Halloween-themed that I hope you enjoy. I avoided the clichéd stuff like Monster Mash or a “hit from hell” (Hangin’ Tough) and tried to find tunes that are spooky and interesting.

I hope you all have a great week and get tons of candy!

Such a great song and who couldn’t use more cowbell in their lives?

If only because I love the defiant way they spell their name.

Everyone loves this song and it has an excellent, consistent beat.

Remember how hot Michael Hutchence was?

This song always reminds me of the Rodney Dangerfield classic Back to School.

Back in the 90s there was a resurgence of swing music and this band did it pretty damn well.

A cool classic by a white lady from England who sounds like a Southern black chanteuse.

For some reason I have been meeting people lately who tell me they are not fans of The Doors. Just as with Bowie last week I say– “Well, you are just f***ing wrong!”

Such a talented guy and he wrote so many great songs but he is mainly known for this one which I still think is pretty cool. (The actual werewolf in the video is hilarious by the way.)

The full video for your viewing pleasure.

One of my favorites from Old Blue Eyes!